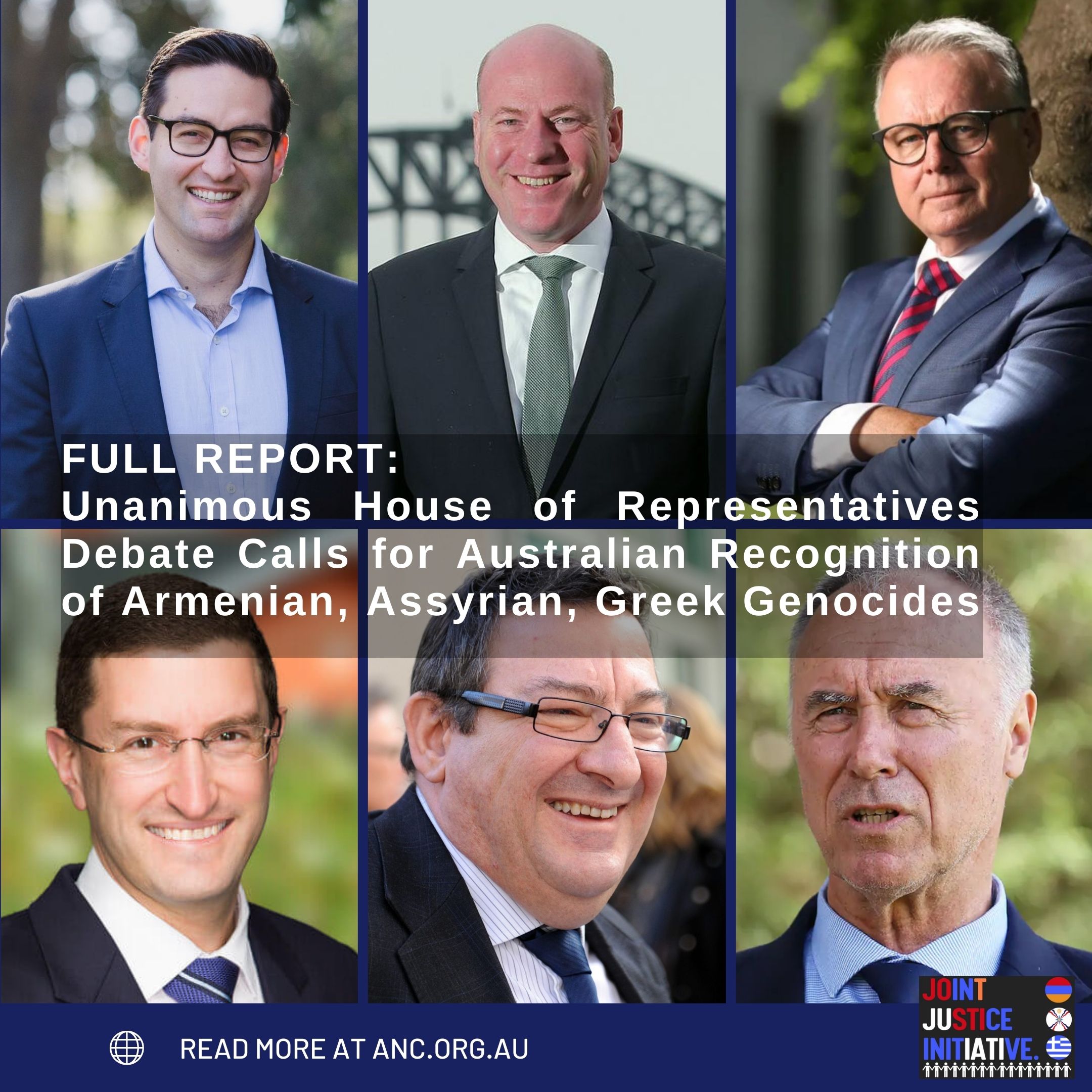 CANBERRA: On Monday 29th November 2021, the Federal Parliament’s House of Representatives unanimously debated in favour of a motion calling on the Australian Government to recognise the Armenian, Assyrian, and Greek Genocides, reported the Armenian National Committee of Australia (ANC-AU).

The motion paid respect to the upcoming International Day of Commemoration and Dignity of the Victims of the Crime of Genocide and of the Prevention of this Crime and urged Australia’s Government to uphold its obligations as a signatory to the UN Genocide Convention by recognising “the genocide committed by the Ottoman Empire between 1915 and 1923 of Armenians, Assyrians, Greeks and other Christian minorities”.

Member for North Sydney, Trent Zimmerman MP moved the motion in the Australian Parliament’s Federation Chamber, and it was seconded by his co-convenor of the Australia-Armenia Interparliamentary Union and former Defence Minister of Australia, Joel Fitzgibbon MP (Member for Hunter).

“The House of Representatives has spoken. The Australian Government has just received a bipartisan and unanimous call to recognise the Armenian, Assyrian and Greek Genocides, from their Parliament’s largest and most representative legislative chamber,” said Executive Director of the Armenian National Committee of Australia (ANC-AU), Haig Kayserian on behalf of the Joint Justice Initiative.

The Joint Justice Initiative was formed by the public affairs representative organisations of the Armenian-Australian, Assyrian-Australian and Greek-Australian communities to advocate for national recognition of the genocides suffered by their ancestors.

“This historic outcome is the first legislative success of the Joint Justice Initiative, and it means our elected parliamentarians reject a foreign dictatorship’s hold on this line in Australia’s foreign policy, and they join our communities’ call on Prime Minister Scott Morrison and his Government to do the same, and call genocides by name,” Kayserian added.

Zimmerman was unequivocal in his call for the importance of Armenian, Assyrian and Greek Genocide recognition during his speech.

“In contrast to Germany, the successor of the Ottoman state, modern Turkey stridently resists recognition of that genocide for what it was, let alone makes any efforts to heal the wounds wrought by those events,” Zimmerman explained.

“It is time that changed, and Australia must play its part by joining what has been a slow but growing number of nations that have recognised the Armenian and other genocides of the Ottoman regime. These events started 106 years ago, yet they remain relevant today.”

“A little more than 106 years ago, more than three million Armenian, Assyrian and Greek peoples lost their lives for no other reason but for their ethnicity and their beliefs. That is genocide: there is no other word for it,” he said.

“And it's time that the Australian parliament joined with many others who have recognised it as such. This is important, not only to give closure to those affected by the events of 1915 but to send a clear signal to the world that genocidal behaviour will not be tolerated by our community of nations.”

Alexander used this debate to repeat his consistent calls.

“There are tens of thousands of Armenians in Australia. We have one of the largest Armenian diasporas in the world. We've had an Armenian Treasurer, and our biggest state was run by an Armenian Premier until recently. Yet we still cannot officially acknowledge the genocide at a national level. My local council has and my state has, but the government I work in still has not. This is shameful,” said Alexander.

Alexander added: "I have pushed during my time in this place to have the Armenian genocide recognised by our government. Not recognising the past's harrowing realities leaves room for mankind's most atrocious perpetrators to continue pursuing heinous crimes against humanity.”

Burns spoke of his own family’s experience of genocide at the hands of the Nazi regime and the importance of Australian recognition of the 1915 Genocides.

Burns explained: “The term genocide was coined by Raphael Lemkin, a Polish-Jewish lawyer. He not only coined the term genocide in 1944 when looking at the Holocaust but also referenced the genocide committed against the Armenians, the Assyrians, the Greeks and other minorities between 1915 and 1923 at the hands of the Ottoman Empire. To this day, this genocide has not yet been recognised by the Australian Government.”

Leeser alluded to the purpose of the United Nations' International Day of Commemoration and Dignity of the Victims of the Crime of Genocide and the Prevention of this Crime and spoke further on the dangers of allowing genocide denialism.

“There is of course a link between the Armenian Genocide and the Holocaust. It is the phrase the member for North Sydney reminded us of, when Hitler famously said: 'Who, after all, speaks today of the annihilation of the Armenians?' That demonstrates what happens when people forget what's happened and they misunderstand the particularity of what's gone on in a particular genocide,” Leeser said.

Georganas, who is of Greek origin, also rose to speak in favour of the motion.

“I rise to support this motion, which recognises the United Nations International Day of Commemoration and Dignity of the Victims of the Crime of Genocide and of the Prevention of this Crime, but I also rise to support this motion that actively recognises the genocides committed by the Ottoman Empire between 1915 and 1923 of Greeks, Armenians, Assyrians and other Christian minorities—in what was known as Asia Minor—and one of the greatest crimes against humanity in modern history.”

Kayserian added on behalf of the Joint Justice Initiative: “The Armenian-Australian, Assyrian-Australian and Greek-Australian communities are now emboldened by the recognition and support of our House of Representatives, and we will use this to redouble our efforts to ensure Australia’s Government recognises the crimes committed against our ancestors by the Ottoman Empire as genocides.”

This major leap forward followed is the second time genocide has been used in a motion in Australia’s Parliament, after a 2018 debate referred to the Armenian Genocide through the prism of Australia's first major international humanitarian relief effort, which was to aid survivors of the genocides of 1915.

Watch the full debate by clicking here or below.