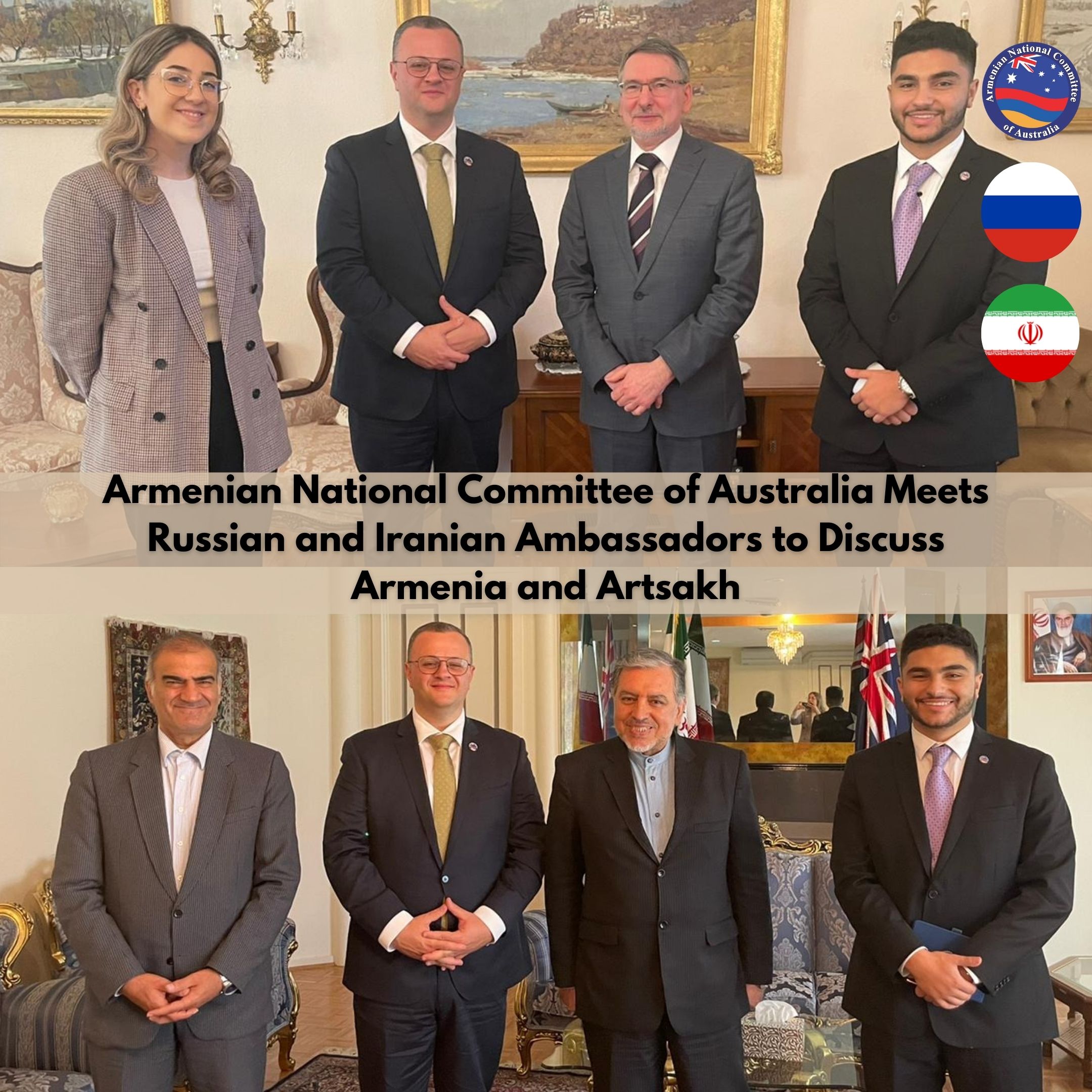 CANBERRA: Representatives from Armenian National Committee of Australia (ANC-AU) have met with the Ambassadors representing the Russian Federation and the Islamic Republic of Iran in Australia at their respective Canberra residences last week.

His Excellency Dr. Alexey Pavlovsky (Russia’s Ambassador to Australia) and His Excellency Mr. Fereidoun Haghbin (Iran’s Ambassador to Australia) individually welcomed the ANC-AU delegation to learn of the Armenian-Australian community’s concerns over the ongoing aggressive and provocative incursions into the sovereign territories of the Republic of Armenia by the Republic of Azerbaijan.

On 16 November 2021, Azerbaijan launched a large-scale attempt to invade territories within the sovereign borders of the Republic of Armenia, attacking the country's eastern border in what was the most major breach of the one-year-old ceasefire agreement brokered by Russia following Baku's occupation of the self-determined Armenian Republic of Artsakh.

The attempted incursion resulted in several casualties, with reports indicating 15 dead Armenian servicemen, five injured and a further 12 captured by Azerbaijan forces, before Russia again stepped in to mediate what is an increasingly fragile ceasefire.

During the meetings, Executive Director Haig Kayserian indicated the Armenian-Australian community's serious concerns regarding the aggressive actions of the Azerbaijani military dictatorship, who are threatening to mimic the ethnic cleansing events during the 2020 Artsakh War.

Kayserian highlighted how these continuing breaches, along with the ongoing humanitarian crisis in the region highlighted by Baku’s continued detainment of Armenian prisoners of war, are further hampering the efforts made by those wishing to achieve peace and stability in the region.

Updates were provided by both the Russian and Iranian Ambassadors regarding their respective governments’ positions on the matter, and further insight was provided. Pan-Turkism in the South Caucasus, Turkey’s expansionist rhetoric supporting Azerbaijan, the status of the Republic of Artsakh, military treaties, the responsibilities of the Collective Security Treaty Organisation (CSTO), red lines and measures to force a commitment to peace were discussed by the parties.

“We welcome the opportunity to have again met with Dr. Alexey Pavlovsky and Mr. Fereidoun Haghbin, and to have discussed these important issues of concern for our community,” said Armenian National Committee of Australia Executive Director, Haig Kayserian.

“We were comforted by the consensual calls for peace in the South Caucasus, and grateful to be able to inform of our continued focus on protecting the territorial integrity of Armenia and the rights to self-determination of the indigenous Armenians of the Republic of Artsakh.”

Australian Prime Minister Scott Morrison Recognises Ottoman Massacres of Armenians as One of the Greatest Crimes of Modern History, Stops Short of Calling it Genocide