NSW Local Government Elections: Yedelian and Mouradian Elected Along With Many Supporters of the Armenian-Australian Community 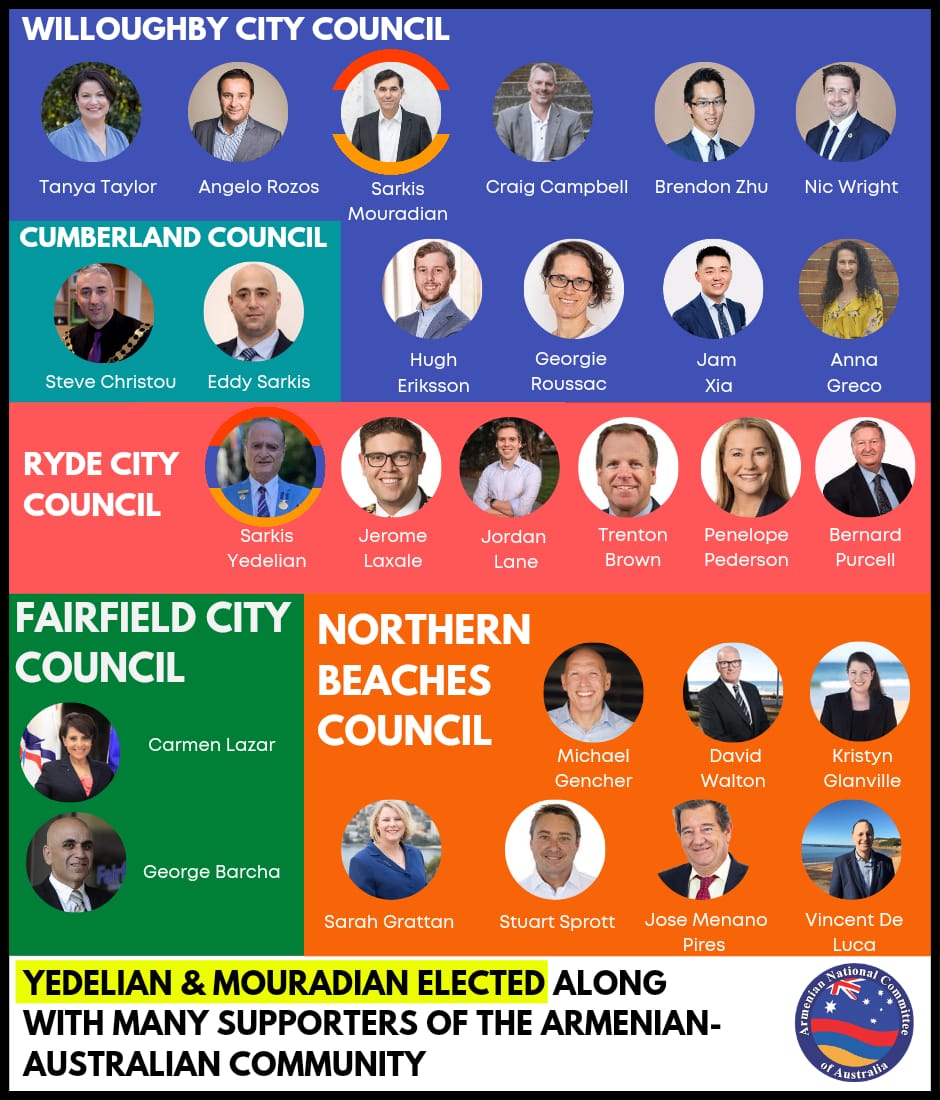 SYDNEY: The recent 2021 NSW Local Government Elections results are in, and the majority of candidates featured in the Armenian National Committee of Australia’s (ANC-AU) pre-election report have won seats in Councils across the state, including Armenian-Australians Sarkis Yedelian OAM (City of Ryde) and Sarkis Mouradian (City of Willoughby).

In pre-election meetings with Ryde City Council, Willoughby City Council, Northern Beaches Council, the Hills Shire Council, City of Parramatta Council, North Sydney Council, Fairfield City Council and Cumberland City Council, ANC-AU covered global Armenian issues – including ascertaining candidate positions on the Armenian Genocide, the rights to self-determination of the Republic of Artsakh – as well as local issues. For the local issues, ANC-AU members expressed the interests of community organisations relevant to the districts in which they serve.

ANC-AU Executive Director, Haig Kayserian said: "We congratulate all those who earned the trust of the citizens in their local Wards and wish them the best in representing their constituents this coming term.”

“As many Armenian-Australians are among these constituents, we look forward to working closely with all Councillors to advance global and local issues of concern to the community we represent.”

“We also congratulate those who participated in the elections, but were unable to earn a mandate on this occasion," Kayserian added.

A report was released by ANC-AU following their pre-election meetings, which was published for the benefit of the NSW Armenian community (click here), and the following is a summary of the results:

In Australia’s most Armenian-populated municipality of Ryde, Armenian-Australian Councillor Sarkis Yedelian was returned to Council, having led the Liberal Party's ticket in the Central Ward. Councillor Yedelian was first elected as an Independent Councillor in 2004 and has successfully been re-elected to the Ryde City Council at every local government election since. Yedelian’s party colleagues, Jordan Lane and Trenton Brown – who led their respective tickets – were also returned.

The aforementioned candidates all featured as strong supporters of Armenian-Australian issues in the ANC-AU Report.

The Councillors are required to elect the City's Mayor within the next three weeks, although this duty will fall with the citizens of Ryde from the next local government elections after they voted for that right during these polls.

Alexia Ereboni Yazdani, another Armenian-Australian candidate who ran as an Independent mayoral candidate in the Hills Shire Council elections, was unsuccessful despite achieving very encouraging support.

Several supporters of the Armenian-Australian community, as reported by the ANC-AU before the polls, were successful in these elections, including incumbents Vincent De Luca (IND), David Walton (LIB) and Stuart Sprott (LIB).

Michael Gencher (YNB), Jose Menano-Pires (YNB) and Kristyne Glanville (GRN) are supporters among the newcomers elected to council for the first time.

The mayoral position will be voted on during Council's first meeting on the 29th December 2021.

The ANC-AU met with candidates in the Fairfield City Council and Cumberland City Council, which are the municipalities representing the majority of Armenian-Australians living in Western Sydney.

Steve Christou and Eddy Sarkis, friends of the Armenian-Australian community in Western Sydney, were also re-elected and will serve on the Cumberland City Council.

Australian Prime Minister Scott Morrison Recognises Ottoman Massacres of Armenians as One of the Greatest Crimes of Modern History, Stops Short of Calling it Genocide