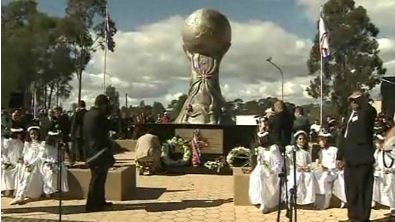 Fairfield (AINA) -- A monument commemorating the genocide of 750,000 Assyrians in World War One was unveiled on Saturday, August 7.

The genocide was begun on April 24, 1915 and lasted approximately three years. It was master-minded by Ottoman Turks and executed largely by Kurds, their accomplices and mercenaries. The genocide also claimed the lives of 1.5 million Armenians and 500,000 Greeks.

More than 2,000 Assyrians and Australians attended the dedication at Bonnyrigg Park. The monument was sponsored by the Assyrian Universal Alliance and officially approved by the Fairfield city council on December 15, 2009. It was designed by Assyrian artist Lewis Batros. Construction of the monument began three months ago.

THIS MEMORIAL STATUE IS DEDICATED TO THE VICTIMS OF THE ASSYRIAN GENOCIDE (SEYFO) IN WW1 1914-1918, SIMELE MASSACRE 1933 AND ONWARDS.

May this remembrance be a blessing to the world by increasing awareness to fight the evils of genocide in a brotherly spirit and by initiating international awareness of the Assyrian nation's rights to existence among the nations of the world.

The monument was strongly opposed by the Turkish community in Australia, who claimed the monument would "sew division" between the Assyrian and Turkish communities. This argument was repeatedly made despite the fact that there is no interaction between these communities and hence no division to sew. Assyrians are Christians and speak modern Assyrian (neo-Aramaic), while Turks are Muslims and speak Turkish.

That the genocide occurred, which most Turks and Turkey deny, is incontestable, as thousands of documents from the period, hundreds of eyewitness reports by foreign missionaries and diplomats, as well testimony from hundreds of survivors demonstrate (AINA 4-23-2010). To claim that acknowledging this would sew division is false. By the same logic, denying the genocide and preventing the erection of the monument would also have "sewn division." In fact, there is already division between these two communities because Turks deny the genocide, which is a fact of history. To truly heal the division, Turks should acknowledge the genocide. That would bring the communities closer together.

The purpose of the monument is not to cast blame, but to begin the process of healing for the Assyrians. Ninety five years after the genocide, its effect is still felt. Assyrians have yet, as a nation, to come to grips with that catastrophe, which claimed 75% of the Assyrian population. The monument, as a simple symbol of acknowledgment, begins that healing process. For Turks and Turkey to deny the genocide and the monument is to keep the wound open and let it fester -- and prevent the healing of Assyrians, Greeks and Armenians.

It would be in the interest of Turkey to come to grips with its history. Denial is not an option or a good strategy. Turkey should follow the German model viz-a-viz the Jewish holocaust.

The Assyrian genocide monument in Australia is not the first of its kind, genocide monuments have been erected in Los Angeles, Chicago, Paris, and Russia, but it is the most controversial one to-date.

In Armenia, on February 5, 2010 the mayor of Yerevan signed an order approving the construction of an Assyrian Genocide monument, and allocating 16 square meters for the site. The monument is currently in the planning stage.