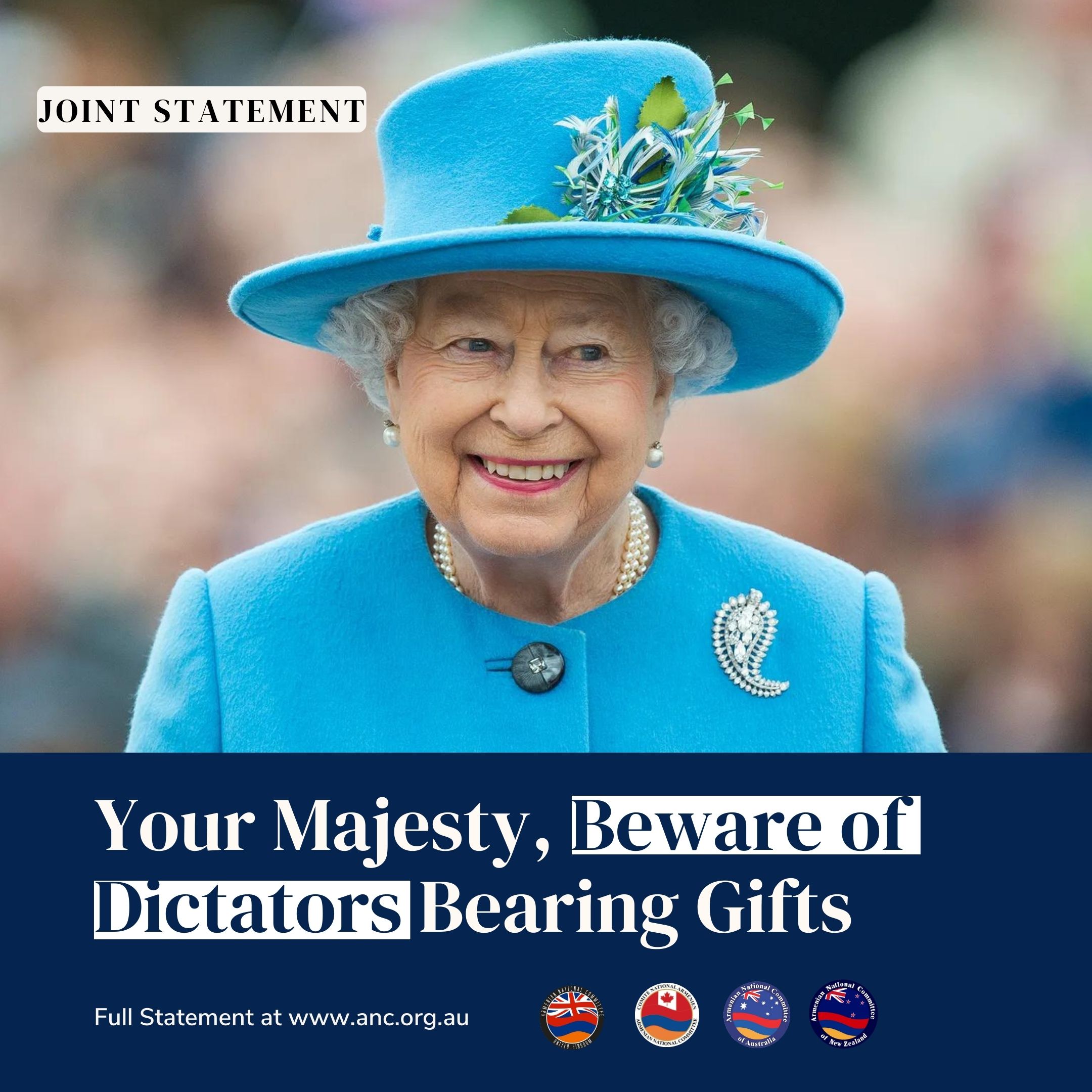 LONDON: The Armenian National Committees representing their respective communities in four Commonwealth countries have notified Her Majesty, Queen Elizabeth II of Azerbaijan's most recent manifestation of caviar diplomacy, attempting to “gift their way to whitewashing an appalling human rights record” in order to win over Western leaders and public opinion.

Contrary to a statement accepting the gift released on behalf of Her Majesty, the letter by the peak public affairs organisations of the Armenian communities of Australia, Canada, New Zealand and the United Kingdom, stress that the gesture is the latest in a series of cynical attempts by the authoritarian regime of Azerbaijan to colour their shortcomings in a positive light.

Baku’s military aggression against the indigenous Christian Armenians of Nagorno Karabakh (Republic of Artsakh), which began in September 2020 and was designed to deny them their fundamental human right to self-determination, resulted in the ethnic cleansing of the Armenian populations in towns like Hadrut and Sushi, as well as Azerbaijan's unlawful occupation of 75% of the region. Further, Azerbaijan continues to desecrate Armenian churches and commit cultural genocide in the Armenian territories under occupation in Nagorno Karabakh.

The letter states that “naming a horse ‘Karabakh Glory’ after such a morally corrupt and destructive campaign of terror was very upsetting to Armenians who are still recovering from the horrors of the war in 2020. Armenians are still dealing with the aftermath of this aggressive campaign. We have been subjected to anti-Armenian racism (Armenophobia) which has become a state policy and even promoted within their education system”.

“The killings of Armenians are glorified at a state level, including declaring the convicted murderer Ramil Safarov, who beheaded an Armenian officer (Gurgen Margaryan) in his sleep while attending a NATO conference in Hungary, as a National Hero after he was released from a Hungarian prison and transferred to Azerbaijan,” the letter read.

The correspondence also highlights that human rights organisations have consistently exposed Azerbaijan’s use of Caviar Diplomacy in several corruption scandals, where they were found to pay their way to enhancing the country’s image amongst the international community.

Inauspiciously, in 2012, President Aliyev became the inaugural winner of the Organized Crime and Corruption Person of the Year award bestowed by the Organized Crime and Corruption Reporting Project (OCCRP). The Queen was alerted that Freedom House has summarised Azerbaijan’s human rights record as follows: “Power in Azerbaijan’s authoritarian regime remains heavily concentrated in the hands of Ilham Aliyev, who has served as president since 2003, and his extended family. Corruption is rampant, and the formal political opposition has been weakened by years of persecution. The authorities have carried out an extensive crackdown on civil liberties in recent years, leaving little room for independent expression or activism.”

“Our communities believe it is imperative that our Head of State, as well as all leaders of the free world, send a clear and strong message to dictator Ilham Aliyev, that we will not be influenced and swayed by Azerbaijan’s carefully crafted caviar diplomacy tactics bankrolled by a corrupt and despotic ruling elite,” commented ANC-AU Political Affairs Director, Michael Kolokossian.

“There is no doubt in our minds that the gift is a deliberate and targeted act by the Azerbaijani regime to glorify its war crimes and cause psychological harm to Armenians in the Commonwealth countries, as well as in their ancestral homeland of Artsakh, who are facing an existential threat and who have witnessed parts of their ancestral homeland be occupied and ethnically cleansed by a foreign dictatorship,” added ANC-UK Chairperson Annette Moskofian.

“Accepting this gift is akin to Her Majesty accepting the grace of other brutal dictators such as Saddam Hussein, Muammar Gaddafi or Idi Amin. The Aliyev dictatorship is as brutal if not worse than those regimes combined, with a recent record of forcefully displaying genocidal intent. Accordingly, we are confident that, upon being fully apprised of the above, Her Majesty should rightly reconsider acceptance of this ‘gift’ and reject Azerbaijan’s blatant and nefarious caviar diplomacy,” said ANCC Executive Director Sevag Belian.